Why Swarm Season Inspections Are Important

Hive inspections during "swarm season" are good. Frequent ones, I've discovered, are even better. That is, if you're actively trying to prevent a hive from swarming.

In general, queen cells are made and capped around day 7. Knowing this helps understand why one should inspect for queen cells every 5-7 days during swarm season.

Today I checked the Purple/White hive, the split from the Blue/Purple hive earlier this year that received a new queen from a supplier. When I checked them 8 days ago I removed several queen cups at the time.

Their population has exploded, and they're barely fitting into the two deep brood boxes they have available to them.

Today, I found 6 new queen (swarm) cells along the bottom of the frames, several of them with royal jelly and larva inside. Luckily none of them were closed yet, although one of them, pictured below, was almost closed. 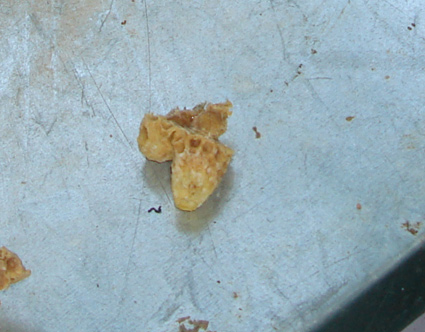 I took a second picture from the bottom of the cell, showing how it's almost closed.

I opened the cell up, and saw the larva inside with the royal jelly.

I found the queen, verified she's in good shape, set her aside and removed all queen cells. I took two frames full of brood/bees/pollen and swapped it for two drawn (but empty) frames with the middle Phoenix hive.

This would give the queen in the Purple/White hive two drawn (and empty) brood frames of extra space to use immediately.

I also noticed that she was laying primarily only in the top brood box, even though the bottom had open cells for her to lay in. I switched the bottom and top brood boxes around as well.

Pictured below, you can see the purple deep is no longer on bottom, rather the white deep is now on bottom.

I hope giving them two extra frames of open space, removing some bees and switching their boxes around helps them a little.

I also gave them a medium super to start drawing out. I'm out of drawn comb, so this won't give them any additional space (comb to use) until they draw it out.

I think my next inspection will be within 5-6 days just in case they're making more queen cells. I think there's another nectar flow around the corner, and if I can keep them from swarming, they should be a great producer this year.