Yesterday I got an email about a swarm of honey bees that were in a tree nearby and was available to the first person who responded.

Hearing they'd been there for a few days was surprising, because we had quite a thunderstorm come through the area the day before, and the swarm cluster managed through it.

I knew swarms didn't hang around long, and the day's weather was now clear, sunny skies...perfect opportunity for them to fly onto a more permanent home, so we had to be quick about capturing them before they left.

I called up the homeowners, Mike and Davi, and got directions to their house and we decided on a time to meet.

When I arrived, the swarm was just as they described, about the size of a football, hanging low in a tree and very each to reach! 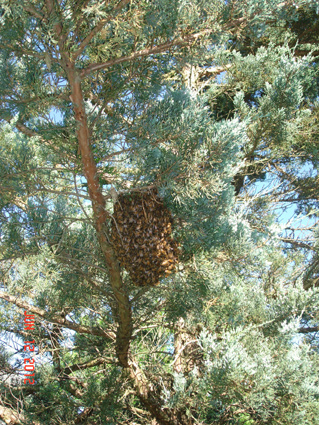 I had an extra nuc box at the house, so I grabbed it and used it to capture this swarm. I placed the empty nuc box below the hanging swarm and then lowered the branch until the swarm was just inside the box.

Then, I whacked the branch firmly and the cluster let go of the branch and fell the rest of the way into the box.

I circled the cluster in the two pictures below to make them easier to see. 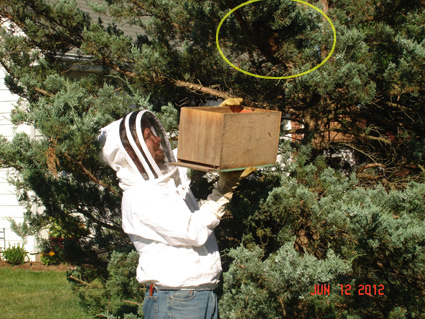 You can click on either of the two pictures above/below for a closer look. 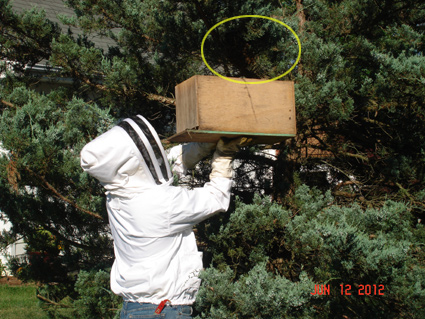 Once the cluster was safely off the branch and into the box, I placed it down onto the sheet I had set on the ground earlier. The sheet was there in-case I somehow missed getting the cluster into the box, the bees wouldn't have to fight their way through the grass to find the box. 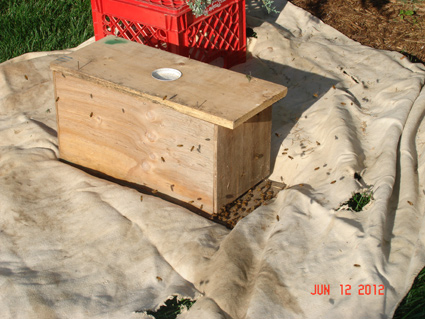 Below you can see how almost immediately several bees came out onto the landing board, stood and fanned the scent of the queen so that the other bees circling the box would know where to go. 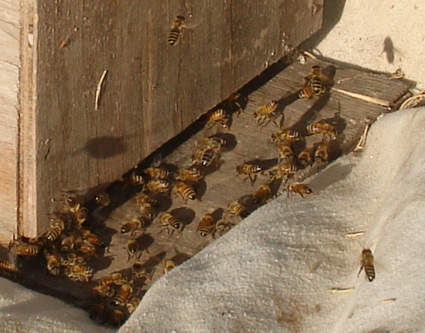 My dad came by to help, and we waited and watched for a few minutes while a dozen bees circled the box, and a dozen more returned from the fields, surprised to find the cluster was no longer on the branch.

We knew it would take some time for them all to find the box and go inside, so with the homeowner's permission, we left the box and sheet for a few hours, and said we'd return after dusk to collect them.

When we arrived at dusk, the bees were all inside the nuc. We placed a bit of screen into the entrance and nailed the lid down firmly for the ride home.

We also placed the nuc box in a mesh laundry bag. We've found this helps keep any loose bees contained when driving, and doesn't trap any heat since it's all open mesh.

Once we got them home, we added a few frames to the swarm of bees in the nuc and gave them some sugar syrup. We're hoping they'll expand and be ready to transfer to a regular size hive in a few weeks.

For my own future reference, he's a list of tools I took along, and although I didn't use them all, I felt glad I brought them just in-case:

Mike and Davi wanted the honey bees saved and not exterminated, and I'm glad they called me. They asked good questions about bees, how/where they live, what it's like to be a beekeeper, how swarming works, etc.

We talked for a while and then my two boys who came with me chimed in with their own experience of extracting honey and watching the bees fly back at home.

I brought a jar of spring honey along with me and gave it to them as a thank-you. Overall I think it was a win-win for everyone!