Racking The Mead and Melomel

It's been about three weeks since I started primary fermentation on the mead & melomel. At about the two week mark they both slowed down to about one air bubble in the airlock every 30-40 seconds. 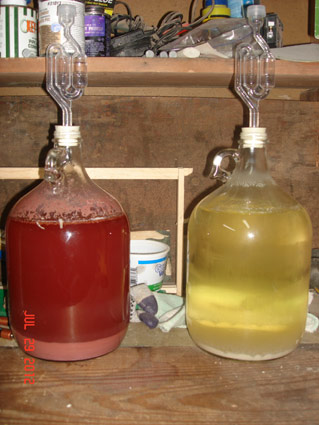 Using an auto-siphon and tubing, I racked them both into new sanitized jugs. In the picture below, you can get a better idea of how much spent yeast (and pulp) were left.

Now that they have been racked off the spent yeast (and fruit pulp) they'll sit in these jugs for several months to finish any remaining fermentation and to clarify. 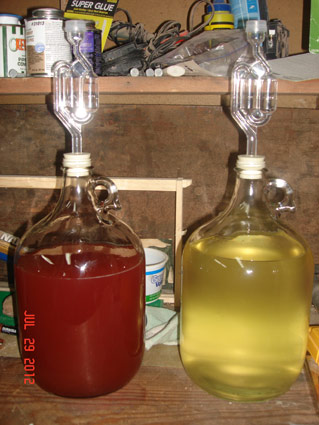 For my own record keeping: I took a gravity reading on each mead during racking, and they both read 0.995.

According to a mead making calculator, I think the alcohol content (currently) is about 13.7%. Once we're ready to bottle in a few months, another reading will give a much more accurate ABV reading.

Already I've got some ideas for improvement for my next batch. Mainly, I'll do primary fermentation in a plastic bucket. I resisted this method for my first batch since I didn't have an extra food grade bucket and didn't want to deal with the plastic.

However, I've realized that by using a bucket, I can make slightly more than 1 gallon of must, and then when it's time to rack I can fill the gallon jugs up to the neck and not loose as much due to the lees and pulp.