Phoenix Queen In A Pinch

The Phoenix hive has struggled all year. I thought a few weeks ago when I gave it a hygenic queen bought from the local club, that I saw laying great in another hive, that they'd finally get going.

When I opened the hive up today, I had one goal: see if the queen was laying vigorously and on their way to building a strong population.

I saw some activity at the landing board, some but not a lot. When I opened the cover, I was excited to see a lot of bees at the top of the frames.

On the first frame I pulled I found the marked queen. She looked good, had a good group of followers and I even saw her poke her head into a few cells checking them out. 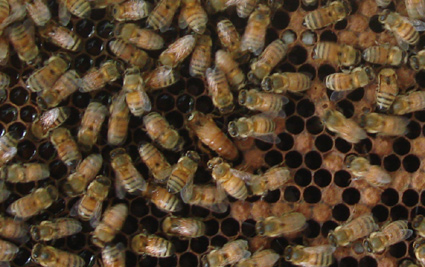 However, upon further inspection I found of the 20 available deep frames, she was only using one frame to raise brood.

Even worse, the brood pattern was really spotty. There was a few eggs mixed in, but I felt for the most part that she wasn't doing her job.

She was a great queen earlier in the year, and maybe when I moved her to a nuc (to create an artificial swarm) and then into the Phoenix hive, something happened to her, or she slowed way down and never sped back up.

Either way, this hive will never make it into winter at this rate.

I've had pretty good luck with letting the hives create their own queen and getting them mated and returned so I thought I'd retire this queen and let them try a new, young queen to jump-start them again.

I re-verified seeing some eggs in the cells, and then pinched the old queen.

The next few weeks looks like cooler afternoon temperatures (not above 100*F) and some rain. Maybe a break from the hot weather and a new young queen is just the thing they need.

If they can't get it together before fall, they'll need to be combined for winter.

They had plenty of stores so I powder sugar dusted them and closed them back up.

In a week I'll make sure they're raising an emergency queen.