PW Hive: Get Some Syrup Stat!

When I checked the Purple and White hive two weeks ago, they had what I thought was enough stores and about 6-7 frames full of eggs/brood.

When I checked on them this weekend, they had almost zero stores left, only 1-2 frames of eggs and were cranky!

I went into the hive to find and mark the queen, but had to quit before I could make it to the second box. The guard bees were circling letting me know they weren't in the mood for visitors today.

I hadn't realized just how fast they consume nectar and honey while raising brood!

Another hive near them is finding and bringing in nectar still, but these guys are just hanging out on the landing board like they're bored with nothing to do.

After pulling about 10 frames and finding not one with any appreciable amount of nectar on it, I gave them a hive top feeder.

The P/W hive is shown on the left below. 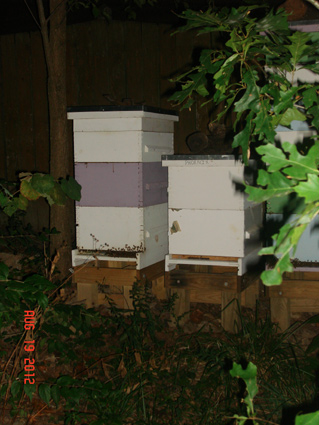 I forgot to take a picture while I was working them today, so I went back out in the dark and got one just now.

This summer has been too hot and too dry. This week the temperatures finally broke, and now we're enjoying mid 80's instead of 100+.

We've had a few days of rain too, so maybe some fall nectar sources will come into bloom?