A week ago I melted down all the burr comb and wax cappings I've saved from the last two years.

Today I remelted the wax and filtered it a second time to further purify the wax, using a different technique.

Today I used a big stock pot of boiling water on the stove, and melted the wax in an aluminum throw away deep pie pan.

Actually, I used two of the pie pans, not wanting to find out the wax somehow leaked into the stock pot below.

As it turns out, I'm glad I used two, because some of the wax did drizzle down into the lower pan. 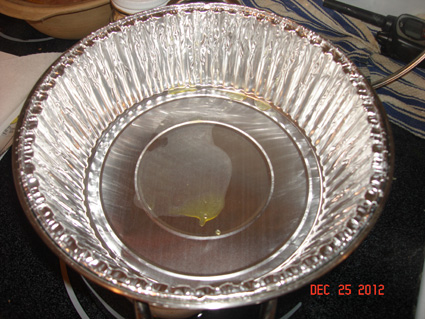 Here's the entire chunk of wax from last week sitting in the make shift double boiler (MacGyver would be proud).

I tried using paper towels to filter the wax, but as it turns out the towels absorbed too much of the wax and held it into to towel. I suppose the paper towels manufactured now days are too efficient at absorbing and holding liquid for them to be a useful strainer.

I removed the paper towels, and replaced them with cheese cloth. Wow- cheese cloth is both an excellent filter medium and works fast.

Below are the three pours I made and allowed to cool.

I'm pretty happy with the way these turned out, and I can't see any particles of debris in them, so I'm going to call them finished.

Maybe I'll be inspired to use them to make soaps, lotions or lip balm?