Ever Been Bitten by a Honey Bee?

Talk to any child who's ever been stung by a honey bee (my own kids included) and they'll tell you without a doubt that bees have stingers on their abdomen for defense. 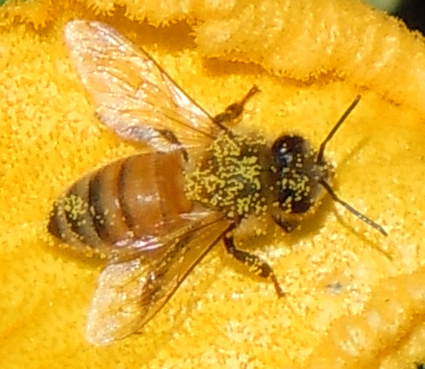 As it turns out, researchers have discovered that honey bees can bite too, and that the bite contains a natural anesthetic.

Apparently this discovery was announced sometime back a few weeks ago but I completely missed seeing the announcement, so I'll post it here in case you missed it too.

The surprise findings were discovered by a team of researchers from Greek and French organizations in collaboration with Vita (Europe) Ltd, the UK-based honeybee health specialist.

The natural anesthetic that has been discovered in the bite of the honey bee and measured at the University of Athens is 2-heptanone (2-H), a natural compound found in many foods and secreted by certain insects, but never before understood to have anesthetic properties. Independent tests have verified Vita’s findings and the potential of 2-heptanone as a local anesthetic.

Until recently, research seemed to indicate that 2-heptanone was either a honeybee alarm pheromone that triggers defensive responses, or a chemical marker signalling to other foraging bees that a flower had already been visited.

A team led by biologist Alexandros Papachristoforou of the Aristotle University of Thessaloniki in Greece was looking for ways to control wax moths. The moths are a problem for beekeepers as they invade hives and stored honeycomb frames consuming wax and pollen and often completely destroying the honeycomb.

At first, the team thought exposure to the chemical 2-heptanone (2-H) killed the wax moths.

"However, on closer inspection, we realized that the wax moths were merely anesthetized for a period of one to nine minutes," Papachristoforou said. "This was quite unexpected, so our scientific team set up a series of rigorous experiments to find out what was really happening and came up with our remarkable discovery."

Their findings were published over at the online journal Plos One.

The full article is a pretty neat read, so I won't go into all the details here, but basically the research shows that honey bees  bite intruders such as wax moths and varroa mites that are too small to sting.

Below is a video from Vita showing a honey bee biting a wax moth larva.

Once the invader is anesthetized and immobilized, it can be thrown out the hive without struggle.