In a study published February 21, 2013 a team of researchers lead by Daniel Robert, Professor of Bionanoscience at the University of Bristol, announced they've discovered that flowers use electric fields as part of their communication mechanisms with bees (specifically bumblebees).

Before you get too excited, there isn't enough of an energy field generated by the plants in your garden for you to harvest energy and power your home.

It turns out that flowers have a slight negative charge relative to the air around them. When bees fly through the air the friction of air and the hair on their body parts causes the bees to become positively charged.

Below is an image of what bees may see when viewing the electrical fields of a flower. Remember as a child when you would scuff your socks on the carpet and then zap your friend by discharging the positive energy particles?

Actually now that I reflect on that fond childhood memory, that conjures up silly visions in my head of bees shocking each other as they come in for a landing and other bees greet them . Ha! 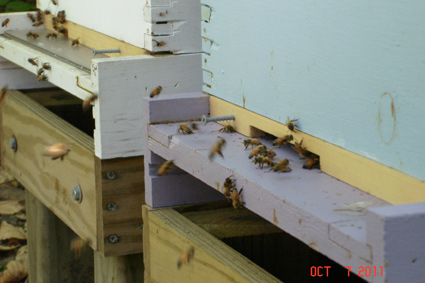 When a positively charged bee lands on a flower, the negatively charged pollen stick to the bee and changes the energy field of the flower.

What Robert's team did was to design an experiment described in this week's Science magazine to see if bees were aware of the electrical interaction.

Robert's team discovered the plant's electric field is changed when a positively charged bee lands on it's petals. Once the bee leaves, the field stays charged for about 100 seconds, sometimes long enough to serve as an indicator for the next bee that flies by the flower.

The experiment showed that bees don't stop to investigate a flower that's recently been visited by another bee.

I wrote a letter to Daniel Robert asking if he thought the same principles held true for honey bees, and his response was:

"We have only preliminary evidence, but it does seem that honeybees have a similar capacity. They share very similar sensory ecologies with bumblebees, and it would not be all too surprising if we found similar, but not identical mechanisms in honeybees." - Daniel Robert, Professor of Bionanoscience, University of Bristol

Daniel continued to say they are continuing experiments this summer with specific hypothesis related to Apis.

I can't wait to hear how the results turn out.