It's been a couple of days since I received some splits from my dad and added a queen to each. I wanted to get back into the hives to make sure the queens were released from their cages and add their second brood boxes.

Both queens were released in their respective hives and the cages were empty.

I'll admit, after reading about a friend of mine who also got queens from the club, and two of his queens were killed after being released, I was a bit nervous to check mine.

Thankfully the worst that happened to me was the bees drew a bunch of wax around the queen cage where there was a gap from a missing frame. 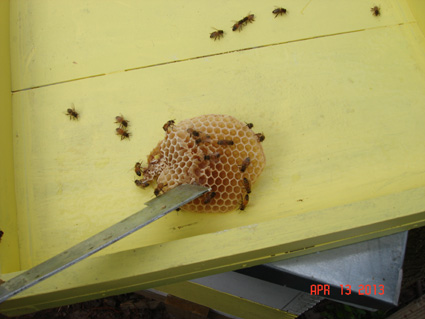 I gave the first split a second brood box. In this box 6 frames were already drawn (I saved the frames from the demise of a hive last fall) and 4 frames are new. 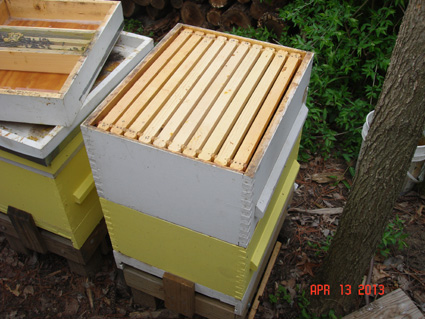 Because they had new frames, I gave them two gallons of sugar syrup to help draw the frames. I'm glad I did because there's rain in the forecast for the next couple of days, and they can use the sugar syrup as supplement to nectar to draw wax.

For the next split I collected the empty queen cage and added a second brood box to the colony. This box only had 4 drawn frames, so they also got syrup to encourage them to draw the 6 new frames of foundation.

Finally I stepped over to my Blue/Purple hive, my best producer and most gentlest hive over the years, and found they only have 4-5 frames occupied by bees. Total.

The queen is a new queen from last fall, and has a decent amount  of brood going on 4-5 frames. The brood may look "spotty" in the picture, but the open cells in the patch of brood have hatched and new brood was already in the cells.

The queen was present and marked from last year and she seemed to be doing OK.  I suppose if I had an extra queen I'd replace her. Or maybe I'll pinch her and let them make their own replacement and see if that helps?

Of their two brood boxes, they have 6 frames of capped honey and plenty of pollen. Maybe the queen is just slow to start, but I think she should already be at two full boxes of bees by now myself.

This is a picture of how I left the hives.