Hive 2
Two weeks ago we were over checking on the hives at Tom's place, and I saw a queen bee emerge from a swarm cell.

Today we went back and found the queen and got her marked.

We found that the hive had drawn out their frames of wax foundation for their super and were filling them with honey. 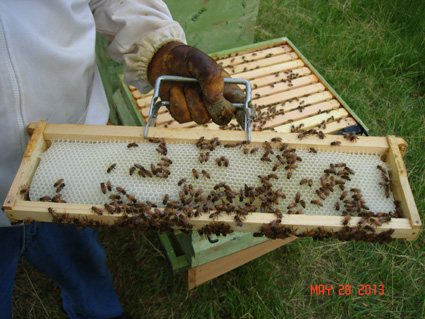 Some of the honey was capped. A moisture reading revealed the capped honey was at 18% moisture, while the uncapped (we assume it was recently brought in from the field) was at 20.5%.

Hive 3
This hive we could not find the queen last week, and unfortunately we saw several capped swarm cells.

We looked through all the frames (2 deep boxes and 2 super boxes) twice and could not find a queen. We suspected she swarmed with a small cluster of bees, and left the hive to make a new queen from their swarm cells.

We're not 100% sure since we couldn't really see a reduction in bees.

This week we checked on their supers and decided to leave their brood boxes alone for another week and not disturb any cells that may or may-not still be in there.

The supers are coming along nicely though.

Plenty of capped honey in these two boxes.

They had not drawn out their extra super (foundation only) that we gave them last week, so we suspect we're in the middle of a nectar lull.

The did do a great job of filling the one pre-drawn super they had, they just didn't draw new wax for their extra super.

Their brood pattern inside the brood box is looking great (see below).

However, on the next brood frame we pulled we found 3 large capped swarm cells hanging off the bottom bars. Yup- that might be what made them less than excited to see us today.

We looked and looked, and could not find any eggs or the queen. We suspect they were running her around to lose weight prior to swarming, or had already swarmed. Again, we couldn't see any difference or reduction in bees so if they swarmed it must have been a small swarm.

We left the cells in place and closed them back up. We'll look at them again in a week or two and see if they have a new queen or not.

Split Hive
The artificial swarm we made out of Hive 2 a few weeks ago isn't making much progress yet.

I think a bunch of their forager bees flew back to the parent hive, and it's taken them a few weeks to get their population back up.

We have sugar syrup on them, but they're not taking much. There is activity going in/out of the hive, so we're guessing they've got enough foragers now to go get fresh nectar.

They haven't drawn any of the 5 new frames of foundation yet.

Soon I need to check on the hives at my house. I haven't seen them in two weeks. I suspect they're supers are full and capped, and ready to be extracted soon.