Why I Bought a Queen Excluder Today

I've been keeping bees for several years and have never used a queen excluder.

In fact I didn't even own any before today. Speaking of which, special thanks to Isabees who is a local supplier near where I live and had them in stock.

The two hives at my house are doing great. They started as splits this year and have built up really nicely. Every available cell (including the open ones shown below) are filled with eggs. 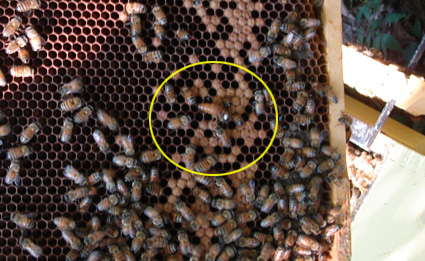 The queens were new queens from this spring and are very hearty and prolific. 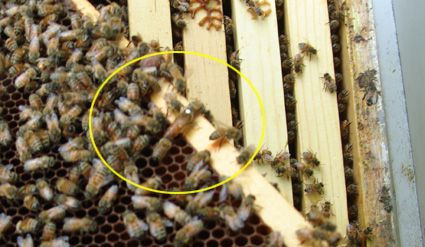 So much so that they put brood in every avaiable frame, including a few of those in the supers.

Yup, that's one of the frames from the super.

I don't mind if the queen uses a frame or two from the super as brood frames, I just leave that one out from the extraction cycle and move on.

In my experience, when the nectar flow is on, the bees fill up the supers with nectar so quickly they push the queen right back down into the lower brood boxes, and thus I've never needed a queen excluder. However, right now the nectar flow is way down and the queen has many extra super frames at her disposal with no incoming nectar to keep her out of them.

I wouldn't mind except I would like to take the supers off, extract a final time and store them for the winter.

So I made the trip to Isabees and picked up two metal (wooden bound) excluders. 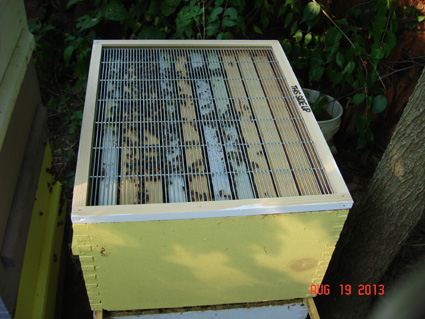 If the excluders work (the theory is they allow worker bees to pass through the metal bars but not the larger queen) the queen should stay in the lower brood boxes and the brood in the supers should hatch out in another couple of weeks.

A side note: I opted to buy the metal excluders as opposed to the lesser priced plastic ones because I wanted them to hold up all year in storage incase I need them again next fall before winter storage.

A warning: Queen excluders can only be used once all frames and foundation have been fully drawn. The bees will not pass through the queen excluder to draw wax on frames. Also, many folks claim that bees are reluctant to pass through the excluder to store honey in the supers, and will instead store the incoming honey in the brood area, possibly leaving no room for brood. Because I don't use exlcuders during the nectar flow, I don't have experience with this, but offer it as a warning anyways because it is a hotly debated topic amongst beekeepers.