The weather report for this weekend and early next week are looking pretty frigid.

Weather.com reports a winter snow storm across the US that is "unseen for decades" and also the "coldest air in 20 years".

We had several inches of snow fall today. It was so dry and powdery the kids couldn't sled in it very well and it didn't pack for snowballs, forts or snowmen either.

Roughly measured, we got about 3/4 a hive tool worth of snow by the time it stopped snowing.

With the wind blowing strong, white-out conditions occurred several times during the day as snow moved from being on roofs and trees to whipping through the air and landing on the ground or up against a house or fence.

Some other pictures around the yard included a birdhouse hanging from a limb.

Below is a picture of a milk crate that was left in the yard, I found it interesting some of the snow made it's way through the holes in the top of the crate and made this pattern.

Maeve went outside to play in the snow, except she couldn't walk unassisted because the snow was up past her knees. 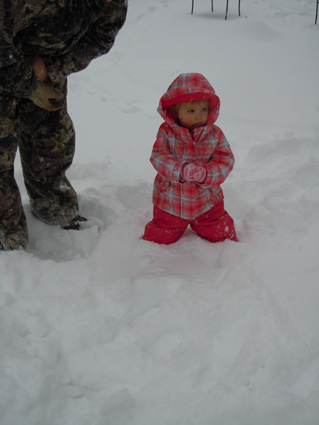 After a while of playing out in the snow, Maeve came inside to warm up in front of the fire.

Friends often ask what the bees do during the winter. My typical response is "they shiver outside in their hives". I'm hoping they can make it through the next several days of near zero temperatures without too many losses.