This past fall and winter we'd lost several of our hives to varroa mites. I've heard someone once say that 20% loss is about average, although I can't remember who.

If my math (and memory) are correct we lost 5 hives or around 60% over the fall/winter. I was so upset I wrote an article about how I plan to start chemical treatment against varroa this year.

As it turns out, one of the hives that did make it through the winter at my dad's house had dwindled and died at the beginning of June.

We had an extra queen on hand and I had a few frames of bees I could spare from my over wintered hive that we made a small nuc of honey, pollen, brood and bees and introduced the queen into them via queen cage.

We've fed them sugar syrup through a quart jar in the top of the nuc for the last two weeks and now they're established and ready to move into a full size 10 frame hive box. 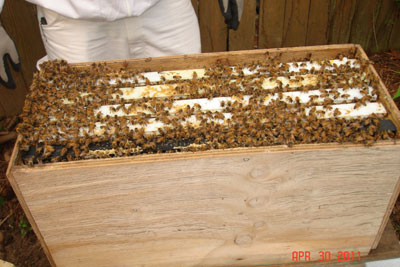 The hive the split came from used to be calm and carefree. You could work them without gloves (if someone actually wanted to)!

This winter the hive has been more aggressive and protective of their hive than last fall. They're not stinging, but as soon as I open the cover, pull a frame, etc., they come out in droves and fly around my hands, veil and ram themselves into me.

My dad reported that he went up to feed them the other day and they were displaying the same behavior towards him. Hopefully when the queen that's in there now raises enough new bees they'll be calmer.

I'm hesitant to replace the queen in my parent hive since they aren't stinging and the queen seems to be doing good. I suppose if I were bees in a hive I would also come out and inspect whoever was bothering my home also.  :)