Maeve's Trip to the Beach

This summer we took the kids down to Disney World in Florida. Our friends graciously offered tickets to the park to us and we were itching for a vacation.

The kids have been asking to visit a beach and see what it's like to swim in the ocean for the last couple of years so I was pretty excited to get to take them to the beach.

Our trip to Florida wasn't completely without honeybees on our mind, though. As we were traveling through Georgia we passed a semi-truck carrying bee hives, presumably of a migratory beekeeper.

Once inside the Magic Kingdom we found the Winnie The Pooh attraction, and paused for a photo inside one of the little houses. It had rained (and continued to rain) throughout the day during our visit, so our shirts were pretty wet in the pictures.

While walking to the line of the ride we found this "Bees at Work" sign and stopped at it for a photo also.

Maeve has figured out that when a camera comes out she should smile as big as she can. Here's a picture of her smiling for a photo in front of a "Hunny This Way" sign.

One of the neat things we liked about the attractions was the entertainment provided for the kids while standing in line. Below is a picture of some metal bars that wrapped around the length of the line, with plastic bees that you could slide along the bars while you walked.

Some of the hives made a buzzing sound as the bees passed through them.

What trip is complete without the purchase of some local honey?!
We stayed at the Lake Louisa Florida State Park in Clermont FL.

Outside of the park entrance was a citrus farm. Their sign advertised "raw local honey" so we stopped in.

We chatted with the woman at the register and found they produced several varieties of honey from their farm, some of them are pictured below. We purchased "Citrus Blossom", "Gallberry" and "Saw Palmetto" honey.

A trip to Florida wouldn't be complete without a visit to the beach! We visited both Clearwater beach on the west coast and Cocoa beach on the east coast.

Both were beautiful white sandy beaches, but Clearwater was definitely crowded. Cocoa beach was much less crowded and had bigger waves which the boys enjoyed with borrowed boogie boards.

We had setup a blanket and after getting Garrison some snacks and sun screen, he was ready for the water.

Emmett took right to the sand and sought out sea shells.

Maeve did a great job of keeping her mouth closed and avoiding drinking the salt water, but still preferred playing in the sand and making sand castles. 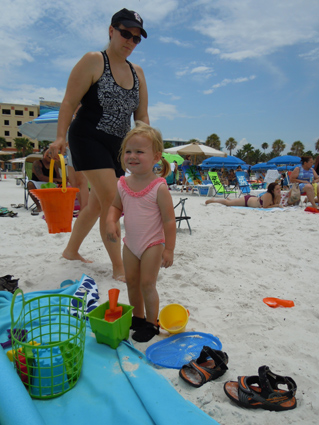 It didn't take long for us to spot an opportunity to bury Emmett in the sand, which I think Maeve particularly enjoyed!

Once the kids put on their life jackets, it was time to take to the water.

Maeve loved the beach so much that she would talk about it in the van each day. When we returned home, we setup an inflatable pool in the back yard. She walked over to the pool and asked "Beach? Sand?" apparently asking why there was no sandy beach for her to play in at the pool.