Hunting for Brood in January

I decided to title this post using the term "hunting" because often when I'm out hunting for wild game, my experiences vary from trip to trip.
Sometimes I go hours without seeing any animals or game that I'm in search of. Sometimes they jump right out at me in great numbers. Sometimes still, the animals are right there, but are so well hidden I overlook them.

My experience this week with checking the hives in my yard (when it was nearly 60*F outside in the middle of January) was much like hunting.
Allow me to tell you the story using some pictures and your imagination along the way.
I opened the first hive, standing behind them starting with the right most hive (yellow and purple), I found a nice size cluster of bees and about 1/3 of the candy board I gave them in December had been eaten.

I pulled the #4 frame (one to the left of center position) of the top box and found brood, pollen, honey and larva. 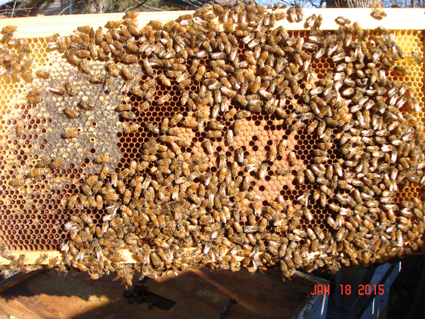 I promptly closed this hive back up knowing they were still queen right and had already started growing their colony size after the winter solstice.
Skipping the middle hive, I went to the hive on the far left (white and white boxes). I pulled the #4 frame from the top box of this hive and also found brood and eggs, and closed them back up.
So far 2 for 2. What I was hunting for was jumping right out at me!
Now turning to the middle hive, I removed the covers and found a large cluster of bees hanging under the inner cover. 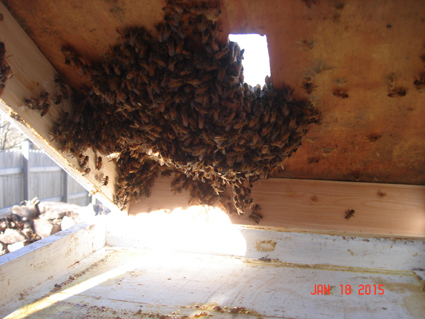 This colony had eaten almost all of their winter candy board. There's a lot of bees in this colony, approx 9 frames on top and 4 more on bottom still.

I started by taking out frame #4 in the top box (I had good luck with frame #4 in the other hives so why not right?). The frame was completely empty.
No honey, no brood, no eggs, no pollen. Uh oh, this can't be a good sign I thought.
I went through a few more empty frames and found some stored honey on either end of the box.
I counted 4 frames (front and back) of capped honey, but they were on the outside edges of the hive and I guess the colony couldn't move to get the honey during the frigid cold temperatures we had the last two weeks, so they went upward and ate the candy board. I moved the frames full of honey towards the middle of the hive where the cluster would be when the temps returned to freezing in a few days.
I was shocked that I couldn't find the queen or any signs of the queen in the top box anywhere. In 5 years of beekeeping, the queens in all my hives (so far) have started laying eggs in the top box during the winter.
I forgot to mention, this hive was "hot". Their ambient temperature wasn't any higher than the other hives, but they were "angry". At times around 50 bees would swarm the hive tool and my hands at any slight movement, and dozens would pelt my veil and jacket without warning.
Having not seen any signs of a living queen in the top box, combined with what I could swear was a drone (in January) walking by and the overall "queenless roar" I was all sure the colony was queenless.
I packed them back up as best I could with angry bees boiling out all over the place and headed inside to think about it.
I started thinking about ordering a queen from the "year-round queen suppliers" found in the bee magazines. My though process went along the lines of "if I can get a queen in there now before the laying workers begin, I can save the colony".
I called the supplier listed in the magazines, only to find they were sold out and didn't in fact have queens year round as they advertised, until April (when every other north american supplier would have queens available).
Ok what next I thought? I didn't want to combine the colony with the other colonies, for fear a newspaper combine might not go well during winter. Now that I look back on it, I can't justify the reasoning, but at the time that's how I felt.
I contacted the chat forum of our local bee club, and someone recommended adding a frame of eggs from another colony, to help spread queen scent around and ward off any potential laying workers until I could order a new queen.
I slept on it for a night and the next day I decided to go back and look through the hive again, to see if I missed seeing the queen.
I put on two layers of gloves, which worked great because I didn't feel any of the multiple stings that I took to the gloves.
I went through the bottom box of frames this time and found there to be the old queen (still marked) and a 1/4 frame of brood. In the picture below, you'll see a large yellow circle of brood, eggs and larva.
However, in about 4 cells to the lower right, I found laying worker eggs. I couldn't find any more laying worker eggs than those 4 cells, in the rest of the 20 frames, so I'm hopeful that other worker bees are destroying the laying worker's eggs.

On the back side of the frame I found the old queen, still marked, as indicated in the center of the yellow circle in the picture below.

I suspect the queen is failing, her scent unable to spread throughout the hive sufficiently to keep workers from laying and keep the rest of the hive calm (they had a queenless roar for sure).
I decided not to move a frame of eggs into this hive or combine them with another colony, having seen their still have their (failing) queen, and simply closed them back up.
I'll order a replacement queen and see if the old queen can keep the laying worker(s) at bay until a new queen arrive.  Worst case scenario, is the hive falls to laying workers and I need to shake them out, and make a split off one of my other hives to replace them. Best case scenario, the old queen holds on until the new queens arrive, and I pinch and replace her.
I flashed back on my research in "The Hive and the Honeybee" book that there are always laying workers in [nearly] every hive, but are kept at bay by other workers who remove the laying worker's eggs and discourage the laying workers.
We'll see what happens in the next month or two as we finish out winter and see what surprises spring brings.