We've been checking the hives both at home and at the farm once a week for several weeks now.

Things have been looking good: they have good queens, brood in all stages, plenty of pollen, bringing in nectar and have been given 1 or 2 supers already.

That's why we were surprised to find capped swarm cells in 3 of the hives last night when 7 days ago there were none.

The picture above is of the hives at the farm. The colony on the left is happy and has no swarm cells (yet). The colony on the right is swarm happy. 17 swarm-cells-filled-with-larva-and-jelly-with-4-of-them-already-capped type of happy. Yikes!

The colonies at my house are itching to leave also. 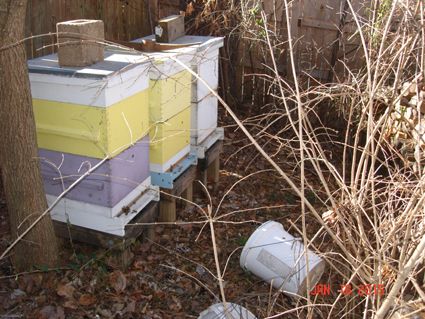 My left most hive (purple/yellow) had 2 swarm cells, not capped. I cut them, rearranged the boxes and will check them again in a week.

My right most hive (all white) had a half dozen cells, 2 of them capped. I cut all but the two capped ones, found the old queen, put her and a few frames of brood into a nuc to simulate an artificial swarm. I'll allow the swarm cells to hatch, mate and return, and the colony should cease their desire to swarm (having a new queen they *should* think they swarmed).

Lets turn the story back to the hives at the farm. You know, the one with 17 swarm cells.

Even though there were capped swarm cells in the hive, by our math, the should have been capped only a few hours ago, or at most 1 day ago based on when we went through the hive the previous week looking for swarm cells.

We decided to cut all the swarm cells, queen cups and anything that looked remotely suspicious. We then dug up a copy of the Demaree Method of Swarm Prevention.

The picture above describes how we left the hive according to the Demaree method.

I started to document the process here, but it ended up sounding more complicated than it really is, so read the PDF directions above.

We'll give the Demaree cycle a go for a few weeks and see if it stops the swarm instinct. It's possible it was too late to start the Demaree process since we had capped queen cells, but the directions weren't clear "when" exactly it's too late to try it. So we're going to try it, and report back on the results.