One of the hives at our out-yard has died.

I've hesitated to post this entry now for several weeks, mostly because I don't fully understand what happened. However I decided to revisit the original purpose of my blog which was to document my experience.

For that reason, I'll present what I know to be true, my thoughts, assumptions and pondering and leave it at that.

The hive was very strong (the right hive pictured below separated into two stacks of boxes) and contained 4 boxes of bees each boiling over with bees on both sides of 40 frames. 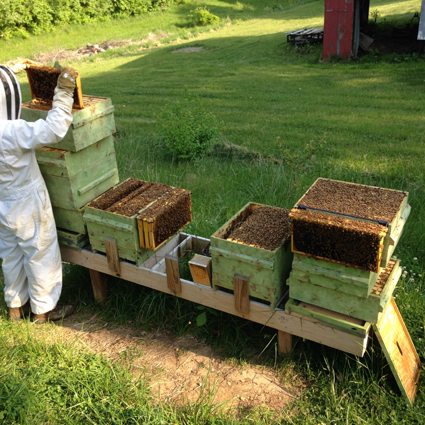 When it Happened
Around the last week of July the colony looked as it does above. Good population, brood at all stages, honey pollen, etc.

A week later the colony was so small you couldn't hardly consider them a nuc.

The original marked queen was still there, so we know they didn't swarm.

Initially we thought it had swarmed, but the original queen was still in the hive, and the majority of it's population was gone. A swarm would, I presume, have left somewhere around 50% of the bees left and the original queen would have gone with them.

Mite Counts
While no mite counts were performed this summer (yet) we did apply MAQs last fall which removed (statistically) almost all the mites in the colony at the time, and helped the colony to remain overly strong all winter.

We've seen no deformed wings or mites on bees like we might have seen in years past on a sick colony.

Queen
The queen in this colony has not shown any signs of struggle this year. She has produced a very strong (edge-to-edge) brood pattern with little gaps in her brood pattern.

The queen was still in the colony at the time the hive was just a handful of bees, so we know the queen didn't leave, swarm, die, etc.

Critters
There are no marking on the landing boards or hive stands to suggest raccoon, skunk or other pest was eating the bees.

Ground in Front of Hive
The ground in front of the hive is grassy, and when the grass was parted, I saw no "pile" of dead bees, in fact, not many bees lay there at all.

Colony Collapse Disorder ?
In disbelief that we might have experienced CCD, I looked up it's definition on the USDA website to be:

This made me pause...I can't find piles of dead bees, I still have a live queen, and the amount of bees left seemed like they were not quite forager age.

Robbed Out Of Their Misery
A week later, the queen and remaining bees were slaughtered in a robbing frenzy. There was a pile of wax cappings on the screen bottom board and the frames were just shredded by robber bees ripping open cappings, leaving jagged edges everywhere and not a single drop of honey left.

We assumed they were robbed by their neighbor colony (to their left in the picture above) but during an inspection of that colony, we could not find the equivalent amount of honey that was missing from the dead hive. That doesn't mean they weren't the robbers though.

Wax Moths
In hindsight we probably should have shook out the colony and cut our losses when we first saw the mass of bees were missing. However we didn't, and when we came back the second week to discover they were all gone and robbed, it was already too late, the wax moths had moved in.

Every frame in both brood boxes were slimmed and crawling with Wax Moth larva.

Interestingly we could find zero evidence the wax moths were in the supers. I suppose they only hang out where there's honey or pollen to feed on.

We took the supers home and stored them. We placed both deeps into the deep freezer where they've been sitting at 0 degrees Fahrenheit (below freezing) for the last two weeks.

Small Hive Beetles
We did notice a higher than normal amount of small hive beetles in the empty frames, although I suppose it could be that without bees in the hive, they were not kept at bay and were allowed to congregate. I'm not sure about this though...we've never tried to count/trap SHB.

Other Out Yard Hive
Also interestingly, when we inspected the hive on the left in the photo (suspected (but unconfirmed) of being opportunist and robbing their dead neighbor) we noticed their population had taken a serious decline, although not (as of the last inspection) to the levels their hive-stand-mates had taken a few weeks ago.

We do have a watchful eye on these guys though.

Hives at Home
So far my hives at home appear to be doing fine. All are queen right, and have good populations including my two spare nucs.

Conclusion/Ponderings
There you have it, a post I had hesitated to write, has been written. Hopefully it will help someone out and at least has been cataloged and document as part of my experience.

Was it mites? I'm guessing not. I've seen bad mites below and it's usually a slow agonizing death of the colony, not the 1 week disappearance like this.

Was it pesticides? I'm guessing not. There are no dead piles of bees around the hive.

Was it CCD? I don't suppose I'm qualified to know for sure, but based on it's simplistic description given by USDA that seems to match my findings...I don't know...maybe?