The weather this weekend was wild.
Upper 30's on Friday evening, 32 MPH gusting winds yet warm on Saturday, and 75+*F on Sunday with intermittent wind.
Sunday I opened the 3 hives at home to see how they were doing. 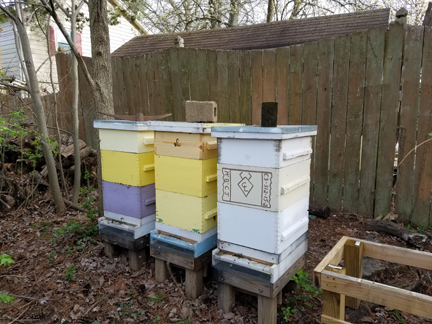 I was optimistic they would have done something with the supers I gave them last weekend, but alas, they chose to finish filling their brood boxes to the gills with nectar. Just as well, it is a little early still.
Two of the hives had lots of burr comb, but no signs of swarming. The third hive, the one that has my Antelope logo on it was ready to swarm. They had two dozen queen cups (same as last week) but they had some eggs and royal jelly in some of them.
I cut all but two of the swarm cells, found the queen and made a split by pulling a couple of frames of bees and moving the queen into a nuc.
The colony should continue to raise and cap the queen cell and then think they've swarmed (The concept is called "Artificial Swarm"). The hive is bustling with 20 full frames of bees, so I didn't feel bad taking a few to make a split.

I also checked the oil pans below each of the hives. One of the hives had almost no SHB larva drops. The other two hives had about a dozen. I cleaned the trays and put them back in.
Also, we're trying something new this year, drenching the ground with GuardStar product to prevent SHB from pupating in the ground should they find their way out of the hive and into the dirt.
We drenched the ground under the hives at my house, and also the hive stands at the out yard, in preparation for moving the hives from my dad's house out to the farm.