We've been checking the hives every 7-8 days cutting swarm cells to prevent the hives from swarming. Right now the hives are trying really hard to swarm. We're seeing capped swarm cells in less than 7-8 days, and upwards of 15-20 swarm cells of various stages per hive. The books suggest queen cells are capped on day 9, but try telling that to these bees!

During this week's inspection of the hives at the farm, we noticed one of the hives didn't seem to have any eggs, but had plenty of brood in both the larva and capped stages. Now in fairness, it could be there were eggs, and we missed seeing them.

In the hive next to this possibly queenless hive, we found a queen fairly easily. She was marked with a white dot and stood out easily against a frame of worker bees. In fact, all our queens are currently marked at the farm.

However, after looking at a few more frames in the hive we noticed another marked queen. Yup, this hive had two different, marked queens in there, both queens seemed to be walking around, co-existing together without any bees trying to ball or kill either queen, neither queen seemed to be fighting each other (at least not while we were looking at them). 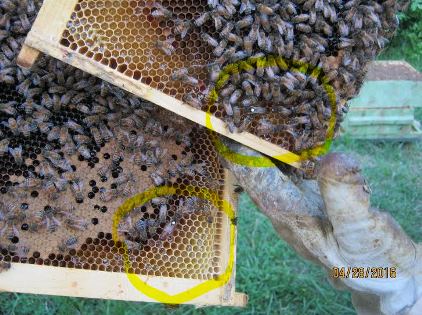 Our best guess, is the hive that seems to be queenless (or at least we didn't see any eggs) may have had it's queen leave the hive (for what reason?) and then enter the hive next door.

A few years ago we had a similar situation at my dad's house. A hive developed a new queen, and for many weeks (or months) we had a marked queen and an un-marked queen where both were raising brood and co-existing together.

The game plan is to check the possibly queenless hive again next week and if we still don't see eggs or a queen, we'll pick one of the two queens from the next hive over, and move her back into what might be her original home.

I thought marking the queen with a dot of paint was enough, who knew I should have taken a sketch of each queen to know what colony they belong to!