This weekend the weather was in the 90s here in St. Louis for Memorial Day Weekend, and I took the opportunity to get back into the hives in my yard to see how they were doing.

Opening the white hive first, I discovered after almost a month, they had finally taken their baggie of syrup. Last week I added two jelly jars as an experiment to see if they would take it faster than the bag. 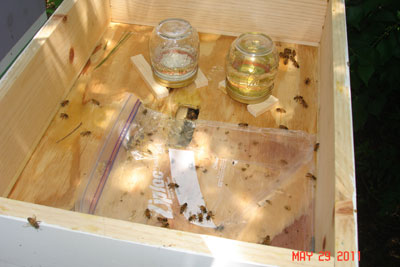 They had finished the bag completely, and drank about half of each jelly jar.

The white hive does seem to be lagging behind quite a bit compared to the blue colored hive. It had about 2 frames of eggs and another two of capped brood, but it doesn't seem to be taking in a lot of pollen or nectar/syrup. Most of the frames in it's bottom box are not filled with stores. I'm not sure what's happening with them.

I was able to locate the queen, and I did get her marked.

Below is a picture of what the top brood box looked like 1 week after adding it.

The bees are primarily on the middle black frame that I moved from the bottom to top box, and they've drawn out one side, of each out the two frames next to the black one. Maybe that they're taking syrup now, they'll be more active in drawing out the top box?

If they don't kick it into high gear soon, I might invite/request my beekeeping mentor John to stop by for a peek.

Opening the blue/purple hive, I discovered they took 3 quarts of syrup in about 5 days. They were completely empty! This is the first time I've seen either of my hives actively taking the syrup, in comparison to my dad's two hives, which have collectively taken 11 gallons so far.

8 frames in the second deep are drawn out, and  maybe in another week I can add a super and see if they will draw it out. I took the un-drawn frames 1 and 10 and moved them in to the center to encourage them to draw them out and replenished their syrup.

In this picture below, circled in yellow, is a baby bee trying to break out of it's cell. It chewed through most of the capping, but as it struggled to poke it's head through, the remaining capping got in it's way. I waited several minutes to see if it would emerge, and then finally put the frame back before it caused them an issue having it out for so long.

The picture below is one of the frames we pulled from my dad's hive, about 5 miles south of my house. This frame is from one of the deeps and we were pleasantly surprised to see the beautiful drawn and capped honey on the frame.

You can't tell from the picture, but the top half of the frame, with the capped honey, the bees only drew the cells about half way out and then filled and capped them.  They have a sunken look to them since they're not as tall of cells as the rest of the frame.

Of his two hives, he has one that is sluggish like my white hive, and one more aggressive hive like my blue/purple one. We think the more aggressive one of his might be ready for a super in the next week or two also.

One topic always mentioned at club meetings, in books and other resources is: Should a beginner beekeeper have one or two hives to start? Because my dad and I each have two hives at our houses, and because we each have one sluggish and one aggressive hive, we're both glad we started with two hives. Starting with two allows the beekeeper to have an extra hive to compare the other hive against, and if needed, borrow a frame of eggs/bees or even combine them before winter if needed.

Oh so many questions!