9 or 10 Frame Supers - Thinking Out Loud

When I bought my bee smoker on e-bay last spring, the seller included a free metal 9 frame spacer in the box as an added bonus.

While standing in my workshop the other night trying to plan ahead for this year, I re-discovered the 9 frame spacer and found myself wondering if I should switch from 10 frame supers to 9 frame supers this year.

Several sources sited advantages of using only 9 frames such as the ease to manipulate and inspect frames, the ability to collect additional wax during harvest, the cost savings of one less frame per super, and of course the holy grail of harvest time, full frames of capped honey that extended way beyond the end bars so that a knife (electric heated or cold serrated) could easily uncap the frames.

After all, reducing the number of frames by one gives the other frames, if spaced out evenly, more room for the bees to draw the wax out further. Below is a picture of a super with 9 frames, where the wax is drawn out way beyond the frame bars. 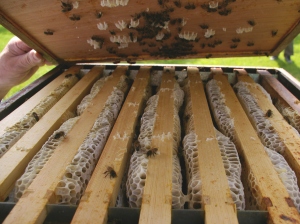 I've seen arguments that converting from 10 frames to 9 frame supers can produce extra honey, while others say the additional amount is negligible, and others still say they see no difference.

I was about to give up searching for my answer, when I stumbled on an article from Bee Culture, January 2006 that discussed this topic. It had calculated the offset of each of the 9 frames in the super and showed how they were staggered over the 10 frame brood box below, causing a blockade near the center most frames.

The only way for the bees to climb up from the brood box to the super in this situation, if they were to come up the center of the boxes, was to make two consecutive turns in a tight area. The author noted how he witnessed congestion of bee traffic up into the super, and returning down into the brood box because of these staggered frames.

The suggested solution is to either stay with 10 frames (in brood box and supers) or if reducing the supers to 9 frames was desired, to reduce the brood chamber to use 9 frames also, thus the frames would all align again as shown below.

Now that I think about it, I am thinking out loud after all, I don't think I really want to reduce my brood box to 9 frames. Since I'm not running a commercial operation, and I enjoy taking my time inspecting the hives, I'm OK with removing the outer most frame, setting it on a frame rest, and scooting over the other frames to inspect as necessary.

In addition, I don't know that I want to give up the extra frame of cells for the queen to lay into or for pollen collection.

While I think it would be nice to have honey super frames where the wax cappings extended out beyond the end bars, I don't mind using a capping scratcher to uncap the frames during harvest.

I think I'll keep my 10 frame brood boxes and 10 frame supers this year. I'll hang onto the 9 frame spacer for now just in case I change my mind.

If you have converted from 10 frames to 9 frames in your supers, I'd love to hear your experience and recommendation. Did you run 9 frames in the super only, or convert your brood boxes also? Did you notice any additional congestion or problems otherwise?