Phoenix Hive Is Back

I have a hive named "Phoenix" because of it's uncanny ability to be on the brink of extinction and then rises back to good health, which continuously amazes me.

I don't know if it's because of beekeeper mistakes, bad luck, bad genes or the hive is just plain cursed.

I went into the hive today as a final ultimatum. Either they have no queen and will be combined immediately with another hive for the winter, or they have a new queen and should get 2:1 sugar syrup to finish packing the frames full for winter.

Honestly I was expecting to combine them.

I moved two frames apart and peered down between them to see golden brown capped cells. Brood! 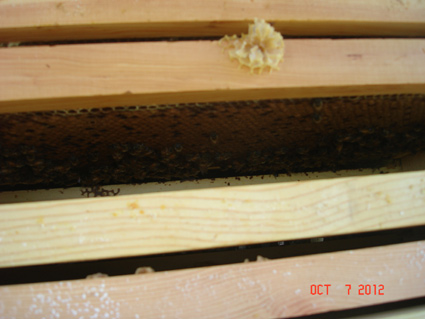 They had reared their own queen again, and are back in business.

They had several deep frames of brood and enough bees to cover it all.

Happy they were once again queen right, I put them back together and got 2:1 syrup on them.

The weather is supposed to hang in the 60-70*F for a few more weeks, hopefully long enough for their population to stabilize and survive the winter.