I've got quite a bit of burr comb and wax cappings from this year's honey harvest that I'd like to melt and purify. 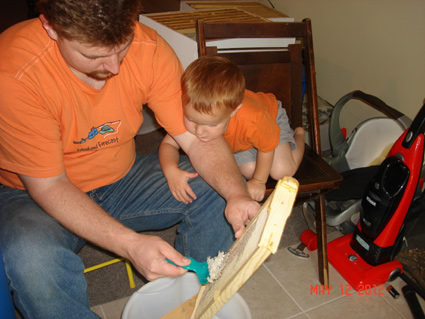 The wax is currently in gallon zip lock bags in the freezer waiting for me to do something with it.

I had planned to melt the wax during the summer or early fall when the weather was still warm enough to use my solar wax melter. However, things got busy and now we're into winter.

Now that we're back into a routine and things have slowed down a bit, I'd like to melt the wax.

I've read about several techniques including using a crock-pot, a double boiler, a microwave (really?), boiling directly into water, etc.

I've heard stories of people splattering wax all over their kitchen only to have their spouse find little drips of wax in obscure places months later. In one extreme case I read about a guy who was melting wax in his kitchen and somehow (might have been boiling it) it burped and splattered all over his ceiling.

What I'd like to know is how do you melt and filter wax without a solar wax melter? What's worked best for you? What should I avoid? Should I melt and keep the burr comb separate from wax cappings or mix them together? How should I filter the wax?