A friend and fellow beekeeper Vince sent me a bottle of his winter Honey from San Jose CA this week.

The bottle of honey was excellent, light, perfectly flavored and went excellent with homemade biscuits and scones! 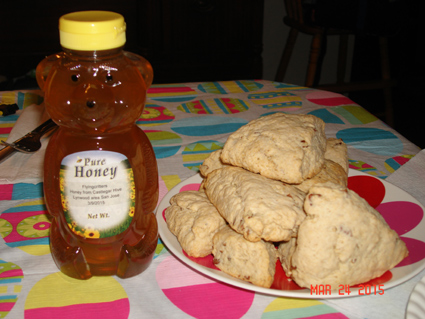 If you live in an area that has cold winters like I do, you might be wondering: How does someone get winter honey?

Here's some notes Vince shared with me about his honey, where he keeps bees and the type of weather they've had the last few months.

Here in San Jose, CA we have had a very mild winter, with temps in the 60s and 70s.  The bees were actually bringing in pollen and nectar in January, February and March.  I had to pull 8 frames of honey from the brood chambers (double deeps) of two hives because they were getting honey bound.  It was enough to fill most of a 5 gallon bucket, or 30 - 1.5 pound honey bears.  I added a second super to those two hives last week because the first super was getting full.

Walking around my neighborhood there is always something in bloom.  We don’t have a dearth.  We don’t get enough rain year round, only in about 5 months of winter, so people water their plants, which keeps them green and blooming all year round.  We have eucalyptus nearby that bloom in January, almond in February,  Peaches in march etc.

Just a few days ago, Vince found and caught a swarm from a compost box. I thought he did a great job capturing the swarm and hiving them, but don't take my word for it, watch the video!

Thank you to Vince for being so kind to share your honey, and the videos!