Back in January 2016 I asked readers for their thoughts on why my bees wax candle may not be burning with as much vigor as I had hoped.

Actually, about 30-60 seconds after the wax burnt off the wick, the candle would snuff itself out.

Recently I decided to investigate a little deeper into what might be causing the issue, and I stumbled upon a great site: The Mountain Rose Blog. The author's article on Making Beeswax Candles really helped get me in the right direction.

Bees wax by itself can be a difficult material to burn because of things like: impurities, density, melting point, etc.

My wax was fairly free of impurities due to the multiple processing/filtering cycles I went through, so I wasn't concerned the wick was clogging up with impurities.

However, the concept of "density" and "melting point" struck home with me while I was reading the article.

Thinking about how difficult the wax is to cut or shave when needing to measure wax for lip balm and lotion making, made me realize the candle was probably burning out because it could not melt the wax fast enough to draw it up the wick and burn it.

Sure enough, re-lighting one of the original candles I made, I began to watch the wax make a narrow tunnel straight down into the wax and then snuff out when the wax failed to liquefy fast enough.

Of course the article also mentions a wick guide, indicating I should have been using #4 size square braided wick instead of the much smaller wick size I was using.

The article suggests blending bees wax with oils that have a lower melting point (because of the fat in the oil) such as coconut oil, olive oil, etc.

Having some unscented coconut oil on hand already, I followed the recommended ratio of 25% oil to 75% bees wax. I melted down my candle down in a double boiler, added the coconut oil, stirred, poured back into the candle jar and added a new #4 size square braided wick.

After allowing it to cool overnight, I pressed firmly onto the top of the candle and it had an ever-so-slight softness to it. It wasn't rock hard like the 100% bees wax candle was.

I lit the candle wick and waited. 10, 15, 30 second went by. I thought to myself "this is about the time the 100% pure wax candle would fizzle out". 1 minute went by. Then another and another. Eventually I walked away (leaving the candle in a safe place that wouldn't catch the house on fire) and came back an hour later.

The candle was still going strong! 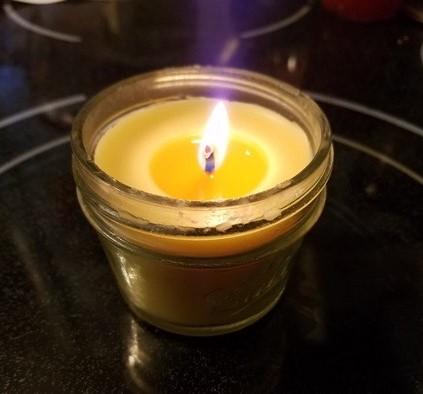 For the next candle I make, I will bump up the ratio from 25% to 30% oil to see if it burns even easier. I did notice the candle would burn a column down and not quite liquefy the wax all the way across the 2.5 inch diameter jar, even though the wick I had was rated for 4-4.5 inch diameter jars.