With the hives ready for winter and not much left for me to do, I've been thinking about how next year might play out in the apiary.

Will I continue to keep 3 hives at the house? Will I put some hives in an out-yard somewhere? What equipment do I need to repair or replace before next season?

I've also been thinking about problems and surprise situations I experienced this year and how I handled them. Could I have made different decisions in those situations?

Here are a few of the things I learned from this year. Maybe they'll be a help to someone else, or bring a smile to others who'll say "yup- been there, did that".

Queen Cups & Swarming: I learned that simply tipping the hive boxes up and looking for queen cups along the bottom board of each frame is not a sure-fire way to know if the hive is planning to swarm.

In the picture below, on the second white frame from the left are small empty queen cups. They're not queen cells, just little cups where a queen cell could be formed. 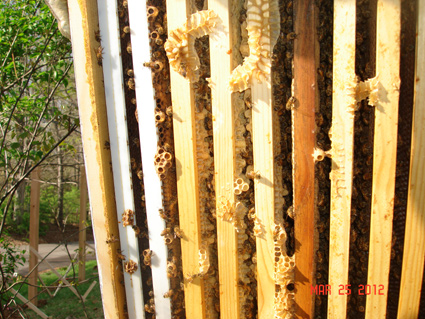 I looked at these, even removed several but did not examine the whole frames. At least not right away.

When I did inspect the full frames a week or two later, I found a dozen fully capped queen cells in the lower to mid level of the frames.

Lesson Learned: Always inspect the full frame, not just for queen cups along the bottom of the frame.


Bees Don't Use a Calendar: This year the weather was much warmer during almost every season. January 1st was almost 50*F (instead of the more typical 30*F) if I remember correctly.

January and February lead to the grass and shrubs regaining their green color early, something that the calendar said shouldn't have happened until March! The weather seemed to be running ahead of where the calendar was.

We had an early spring honey harvest and the summer nectar flow seemed to stop earlier than normal also.

I found I needed to pay close attention to the bees and take from their cues and not to rely on what my calendar said to do.


That little Velcro Flap Covering the Zippers at the Bottom of the Veil: If you've got a beekeeping jacket with a veil that zips into place, then you know what I'm talking about.

The vertical jacket zipper runs upward the full length of the jacket to the neck and is met by a horizontal zipper (or two) that allows the veil to be attached/removed from the jacket. There is a square patch of material on the bottom of the veil with Velcro on the back to cover where the zippers intersect.

In the picture below, the veil is unzipped from the jacket and you can see the square patch of fabric/Velcro hanging down in front that would cover the zipper seams when re-attached to the jacket. 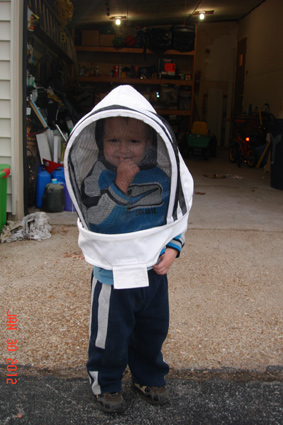 One day this fall I was inspecting a set of very "agitated" bees. There was no nectar flow and I was bothering their routine by looking through the hive. I thought I securely fastened the Velcro down over the overlapping zippers, but I obviously hadn't.

Half way through an inspection I kept hearing one of the bees buzzing. That sort of incessant buzzing not of a curious bee who walks quietly across the front of the jacket or veil, but of one that was intent on letting me know she was upset.

I looked, but couldn't see her. I was able to hear she was somewhere below my neck, so I figured maybe she was suck in a fold of material on the front of the jacket. I stood up straight hoping any folds of the jacket would straighten and she'd fly away.

As it turns out she wasn't stuck at all. She was at the junction of the zippers, trying to get her way into the veil. When I stood up, the zippers flexed and opened just enough for her to sneak her way in. Had the Velcro been secured into place, she wouldn't have had access to the zippers at all.

I can only imagine how I must have looked to anyone watching as I dropped my hive tool and ran circles around the apiary trying to get the veil unzipped and off of me as fast as possible.

Looking back on it, I can't believe she didn't sting me. She might have been disorientated or bumped around as I was running in circles, or something. I got lucky and was able to get it off before she got me.

You can bet that each time I suit up now I always double check that little Velcro flap over the zippers.


The Bees Know What To Do: Never mind that bees as a species survived on their own for millions of years, I was certain I knew what I should do for them...or do to them.

This spring I made an artificial split and the hive went queen-less. At the time I thought my efforts of selecting and culling of queen cells, adding additional frames of eggs, etc., that I was making the best decisions for them.

They made me eat my words and showed me me they knew what was best after all by tearing down the queen cells I left for them, and re-making their own.

In addition, I also learned to give them and extra 10 days beyond what the published timetables say to expect for a new queen to hatch, mate and lay eggs.


Natural Drone Mating Area: I've had at least two new queens (that I'm aware of) via superceedure or replacement raised in my hives, fly out to be mated and return to lay a beautiful wall-to-wall pattern of brood.

I've got some ideas about where the drone congregation area(s) might be near my hives, but wherever they are, they've got some good drone genetics that produce great laying queens.


Catching a Swarm: This year I put my name on a local swarm call list, and received a call from a house nearby who had a swarm in a tree.

The swarm was reachable from the ground, and was easy to retrieve.

I learned that catching swarms is a great way to get free bees, meet new people and share with them about beekeeping.


Mead Making: This year I tried my hand at making mead. I've made a batch of traditional mead, blackberry mead and fall harvest cyser. 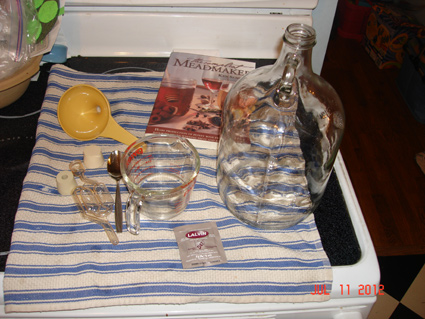 It's too early to sample these meads, they need more time to age, but making them sure was a lot of fun.

The process is easy and relatively inexpensive, both are a winner to me.

Your experiences,  and lessons this season?
It's been a pretty busy year for me in the apiary and I've had a lot of fun.

If you've got an experience, story of something that happened to you, discovered something new or have something to share, I'd love to hear about it in the comment section below!