"Whoa- look at the amazing amount of wild burr comb they drew" is what I exclaimed as I opened the cover on one of my hives this past weekend. 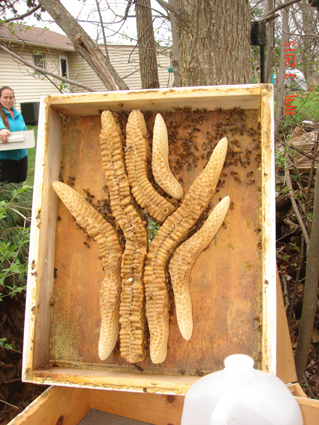 I had a 2 inch rim board on the hive all winter from some fondant I had given to them. They ate the fondant and used the extra space to draw wax. Lots of wax. In an interesting shape so that they could still use the hole of the inner cover.

I hadn't removed the inner cover by the first of April because, quite honestly, the weather wasn't that good and we didn't have any visible nectar yet so I figured now was a good time to remove it. 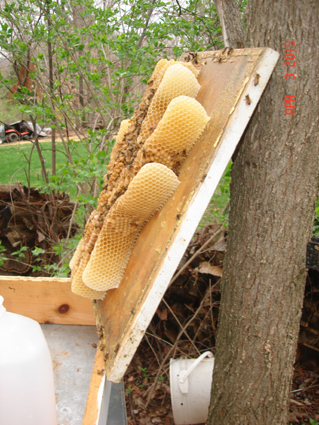 Wrong. I should have done that about 2 weeks ago, and given them a box of new foundation to draw out. Oh well, hindsight and all that.

I removed the wax and gave them back their inner cover (sans the rim board). This hive is exploding in population so I gave them a new super of wax foundation and a super of already drawn foundation.

Remember this post "Hunting for Brood in January" where the middle hive had only 1 frame of eggs, and some of which were laying worker eggs? 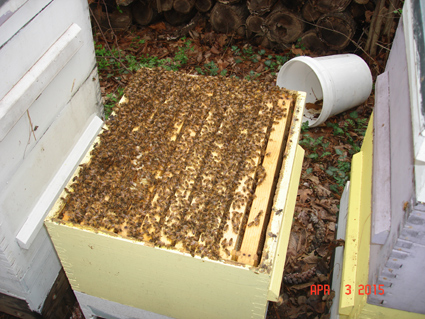 Yeah, that hive is doing just fine also. Overpopulated and crowded! I would up ordering a queen that I now don't need, but didn't want to loose her since I paid for her.

I made some nucs and used one of them for an artificial swarm on the middle hive. I took about 3 frames of bees and the old queen and moved her into a new nuc. I added two frames of foundation that I coated in more bees wax and gave them a nuc-sized hive-top-feeder. 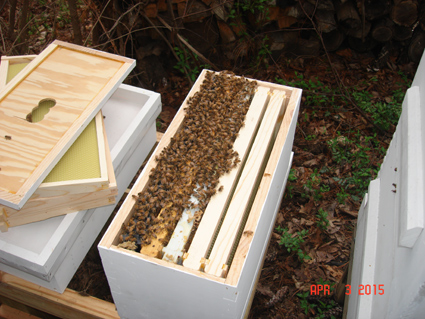 Then we went over to Tom's farm where we moved some hives to last week, and used two more purchased queens and made 2 splits over there.

Update 4/9/2015: I checked on the middle hive at my house and the queen was already released. I looked at the drawn super I gave them over the weekend, and they have 2 frames in the middle of the hive that's 1/4 full of honey already.

I gave the middle hive and the right most hive a new super of wax foundation in-case they're in the wax-drawing-mood, I don't want to miss the opportunity for them to draw wax.